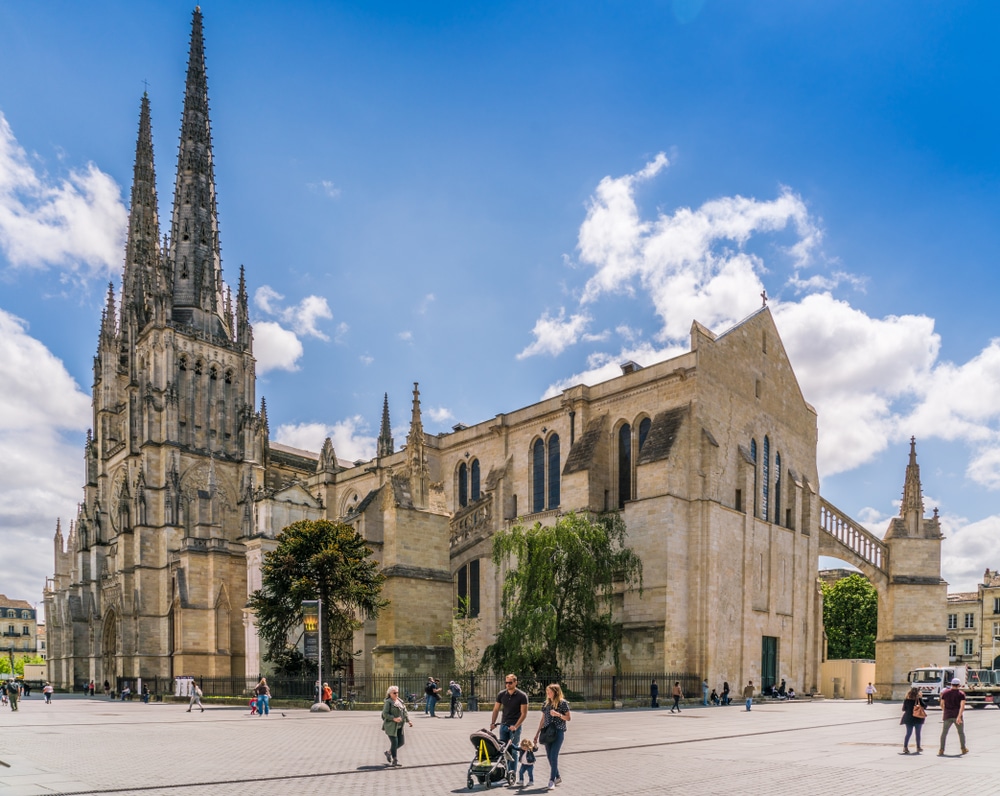 The city of Bordeaux is like its wines – rich, colourful, complex, and ever-so desirable.

Situated on a meander in the River Garonne in southwestern France, in Bordeaux life flitters between the left and right banks of the river, bistros tucked into attractive side streets, Europe’s largest public square, and submarine docks repurposed for a second life as a cultural centre.

And, just like its wines, Bordeaux is not necessarily what it appears at first glance. Traditions abound, but that doesn’t hold back the hi-tech industries turning attention away from the docks and vineyards for the first time in centuries.

Don’t waste a second with the 15 best things to do in Bordeaux.

Occupied by the Nazis after the fall of France during the Second World War, Bordeaux’s history as a riverside port city a short distance from the Atlantic Ocean made it a prime location for Hitler’s U-boat fleet.

Impossible to destroy due to the strength of its concrete and steel superstructure, the 11 giant bays of the resulting submarine pens have been converted into a much-loved cultural centre.

Throughout the year, BETASOM hosts exhibitions and concerts as diverse as opera and jazz, the backdrop of concrete enlivened by excellent lighting.

You’ll find base sous-marine slightly north of the city centre, on the left bank between the district of Chartrons to the south and Bacalan to the north.

UNESCO’s largest urban World Heritage Site comprising roughly 40% of the city, the Port de la Lune area of Bordeaux is formed from one of the city’s most historic districts.

So named because the area forms a rough crescent moon shape on the left bank of the Garonne, the largely pedestrian Port of the Moon is an atmospheric place to explore.

Boasting some of the finest collection of eighteenth-century buildings to be found anywhere in Europe, including hotels particuliers mansions built by wealthy wine merchants, its facades are only broken by the area’s towering gateways and historic church spires.

At more than 25 hectares in area, the Place des Quinconces is worth visiting if only to say you have stood in the largest public square anywhere in Europe.

But beyond this fact, this tree-lined square has further attractions that warrant investigation.

Designed in the early 1800s on ground cleared from the remains of a castle, it has several monuments of note.

The grandest is probably the Girondists Monument, marking a political faction that fell foul of disagreements during the French Revolution. You also won’t fail to miss the larger than life bronze horses galloping out of the fountains.

Bringing new life to another former military establishment, this time an army barracks, Darwin is one of Bordeaux’s newest and trendiest spots.

Located within the Bastide district on the right bank of the Garonne, it is a hub of eco-friendly building in wood, stone, and steel that seeks to be an example of what cities can become in the next decades.

Reimagining spaces, graffiti-covered skate parks sit next to vintage stores, which in turn share street fronts with organic markets and co-working spaces for creatives in the hi-tech industries tapping away at laptops in between stops at the local micro-brewery.

At the heart of Bordeaux’s Port de la Lune area, the cathedral’s twin spires form a magnificent welcome to another of Bordeaux’s UNESCO World Heritage Sites.

Dedicated to Saint Andrew, the first church of the name was consecrated by none other than Pope Urban II in 1096.

Much of the current structure dates from the 1300s-1400s. Built in the Gothic style, it acts as a reminder of the artistry and engineering skill of our ancestors, while hosting the Marcadé Collection of medieval miniatures.

Next door, you’ll find the Tour Pey-Berland bell tower, topped by a giant gilt statue of the Virgin Mary carrying the infant Christ in one arm.

Occupying one of Bordeaux’s most impressive modern structures, La Cité du Vin is a museum dedicated to the wine industry.

A stone’s throw from the BETASOM cultural centre in the Bacalan district, the permanent exhibits guide even novice wine drinkers through the history and production of wine, not just in Bordeaux, but right around the world.

Since wine is as much about the taste as anything, ‘the city’ includes three different tasting areas, including the belvedere, which climbs 35 metres above the rest of this stylish building to provide picture perfect panoramas of the city.

Right on the river bank, the Miroir d’eau is the largest reflecting pool in the world, at an immense 3.4 kilometres square, but only ever two centimetres deep.

Located in front of the Place de la Bourse, the artwork creates near-perfect mirror images of the grand buildings found in the square, as well as anyone who happens to be passing through.

These buildings were completed around 1740, and are excellent examples of French architectural style from the period.

Designed to be walked through, the magic of the Miroir d’eau is heightened further by a misting that creates a low fog several times an hour.

Proof if proof was needed that the ancient Romans enjoyed Bordeaux as much as its modern-day visitors, the Palais Gallien is the name given to the remains of a grand amphitheatre that would have once seen 20,000 spectators streaming through its doors.

The oldest Roman remains still in existence in the city, its ruins consist of a multi-level gateway and arched walls surrounded by more recent housing.

It would have once run for 70 metres on its longest side, and is thought to have been built in the third century AD to commemorate (or maybe impress) the emperor Caracalla as he visited Burdigala, as Bordeaux was then known.

Bordeaux’s Museum of Fine Arts is housed within part of the Palais Rohan, and holds a collection of paintings and sculpture dating from the fifteenth to the twentieth centuries.

One of the largest museums of its type in France, it began life in 1801. Its collection of more than 8,000 works includes the Martyrdom of Saint George by Rubens, and Landscape of Cagnes by Renoir, as well as works by Picasso and Matisse.

The collection is split between two wings of the building, separated by the courtyard gardens. An additional building, the Galerie des Beaux-Arts, houses temporary exhibitions.

Directly translating as ‘the big bell’, La Grosse Cloche refers in fact to both belfry tower and the bell it contains.

Demonstrating architecture typical of the period, it has two rounded pitch-roofed turrets guarding the bell and gateway below.

Its history includes time as a juvenile prison, with the dungeons open to visitors to this day.

Its bell was cast in 1775, and weighs close to eight tons. It is rung at noon on the first Sunday of each month, and important days in the French calendar including Bastille Day.

The gold lion weather vane that sits on top of the central point represents the symbol of the kings of England, as seen on the Royal Standard. It’s a reminder that Bordeaux was part of England’s possessions for around 300 years, until it became a de facto part of France in 1453 at the end of the Hundred Years War.

Located fittingly on Rue Le Corbusier in the suburb of Pessac roughly half an hour southwest of Bordeaux by road, the Cité Frugès-Le Corbusier is a collection of 50 homes built by the French-Swiss architect in 1929 at the request of industrialist Henry Frugès who sought decent housing for his workers.

A UNESCO World Heritage Site since 2016, the buildings aspire to Le Corbusier’s modern aesthetic of bare and painted concrete in perfect geometric shapes.

What’s most enjoyable about these homes is that many of them are still lived in by ordinary Bordeaux residents, just as Frugès and Le Corbusier intended.

Once the palace of the archbishop of Bordeaux, the Palais Rohan today serves as the town hall.

It was built in a neoclassical style in the 1770s and 1780s, with a courtyard garden that once took a formal French style but today has adopted the English landscape style.

Just as impressive from the inside as it is from the outside, the main staircase is exquisitely carved from stone by masons of the period, while the panelled salons and dining room are the works of Pierre Lacour, the Bordeaux painter who founded the Museum of Fine Arts.

Though small, at only 600 metres in length, Bordeaux’s Botanical Gardens occupy a prime site on the right bank of the Garonne.

Surprising to some, the gardens only date their conception in 1997, meaning their planting is still young by comparison to similar gardens in the country.

However, the gardens offer great views back towards the eighteenth-century buildings of the Port de la Lune on the opposite bank, in addition to providing an excellent gateway into the plants of the region through its mix of outdoor planting, arboretum, and greenhouses.

The Porte Cailhau is an elegant defensive gateway built between 1493 and 1496. Its river-facing side depicts the victories of King Charles VIII in capturing Naples at the Battle of Fornovo.

Part of the now-lost city walls, that were first laid out by the Romans, it stands 35-metres high.

There’s an observation deck roughly a third of the way from the top, from where some of the best views of the Pont de Pierre, the city’s oldest bridge, can be captured.

As a city that made much of its wealth from its port, it would be remiss to visit Bordeaux without having taken to the river waters that run through it.

With many of the city’s top sights on or close to the Garonne’s banks, including the Place de la Bourse, Botanical Gardens, and Base sous-marine, a river cruise saves your feet without you having to miss out on any of the city’s attractions.

Time it right, and you might even manage to drift among the city’s grand buildings as the sun gently sets.