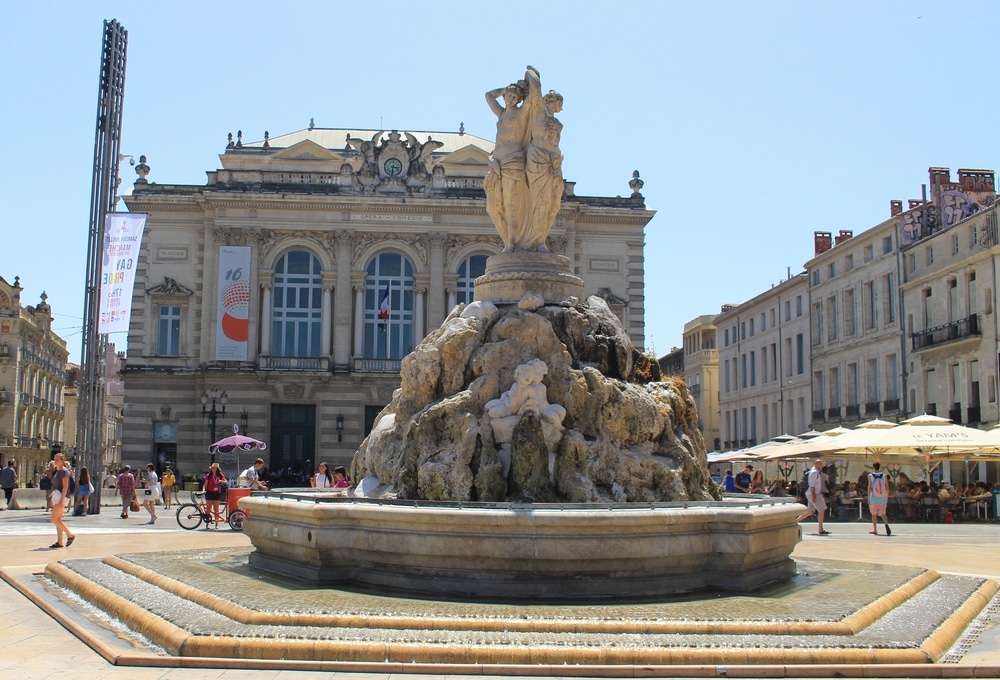 It lies approximately ten kilometres inland from the sparkling waters of the Mediterranean Sea, which is a result, it’s said, of the risk of pirate attacks on this area of coast when the city was founded in the tenth century.

Now one of the fastest-growing cities anywhere in France, Montpellier has been multicultural since its earliest days, welcoming in turn Jews, Muslims, Huguenot Protestants and French Algerians.

This tradition continues today, with roughly a third of the population being students, giving an edgy vibe to a city that otherwise boasts 1,000 years of history.

Keep reading to discover the 15 best things to do in Montpellier.

The remains of Montpellier’s defensive citadel date back to the 1620s, when it was constructed by the Catholic French king Louis XIII in order to keep control of a Protestant city that had already rebelled against his rule on more than one occasion.

Lying between the old town, or l’Écusson, and the River Lez, it comprised four bastions in a rough square shape linked by a wall. All still in existence, the two southern bastions, Bastion de a Reine and Bastion de Ventadour, are perhaps the best preserved.

The northern Bastion du Roi (King’s Bastion) forms the backdrop to a small but attractive urban park filled with palms and other Mediterranean plants.

The historic heart of Montpellier, the Écusson forms a rough pentagon of narrow maze-like streets that manage to maintain a feeling of their medieval origins even to this day.

There are few better ways to explore this neighbourhood than to drift without any real plan from street to street, stopping to take in a bite to eat or enter one of its independent stores.

The aptly-named Polygone shopping centre is known for its fashion boutiques, while the city’s proximity to the Med means local seafood takes top-billing on the menus of many of the area’s bistros.

This grand square is in fact oval in appearance. But at the centre of the Écusson, it is an attractive sight at any time of day or night in any case.

Always thriving, it is lined with important architectural works, not least the Opéra Comédie after which it is named.

Built in Italianate style in 1888, the Opéra competes for attention with the nearby modernist boxes of the Corum cultural centre, ancient stonework of the Citadel, and majestic artwork of the Three Graces fountain that sits in front of it.

Situated in the Hôtel de Massillian, one of the city’s many private mansions, the Fabre Museum takes the name of a local artist who massively increased the city’s collection of artworks with a donation of his own paintings.

Recognised of being of national importance, the Fabre Museum is one of the largest in France. The collection is housed in an exhibition space more than 9,000 square metres in scope.

Part of Montpellier Zoo on the northern side of the city about five kilometres from Place de la Comédie, La Serre Amazonienne consists of the largest tropical greenhouse in the country.

Created to represent the complexities of South America’s Amazon region, it not only contains more than 3,000 plants, but also 500 animals of 61 species native to that region. Many are able to move about freely beneath its protective glass canopy, with species including ocelots, anteaters, bats, and piranhas.

Created to instigate captive breeding programmes for endangered species, the 2,500 square metre space is divided into seven zones by climate, with the rainforest’s high humidity maintained by artificial rain showers every couple of hours.

Also known as the Arc de Triomphe, the Porte du Peyrou was constructed in 1693 as a gateway to Place Peyrou, which sits at Montpellier’s highest point. Its decorative bas-relief panels were not added until 1715.

They depict important moments from the reign of King Louis XIV, the so-called Sun King, including his defeat of the Dutch Republic in the War of the Grand Alliance.

Designed by François D’Orbay, who also worked on the Louvre and Palace of Versailles, visitors are able to climb its 100 steps to the open-air viewing platform, or busy themselves with the Sunday flea market in the square below.

The fortress-like exterior of Saint Peter’s Cathedral dates back to 1364, when the structure was still a humble monastery church.

Now considered one of the most important Gothic-era structures in the region, it was only elevated to the city’s cathedral close to 200 years after it was built.

Saint Peter’s received significant damage during the religious wars between Catholics and Protestants than occurred during the latter sixteenth century, and underwent major rebuilding as a result.

Its most recognisable feature is its exterior canopy porch of stone, supported by giant turret-like pillars 4.5 metres in diameter. Inside are the relics of several saints, including Saint-Germain and Saint-Blaise (but not of Saint Peter himself).

Roughly an hour east of Montpellier by road, the Camargue is a region of astonishing natural beauty in the delta of the River Rhône.

A protected Ramsar Wetland for a third of a century due to its importance to the region’s birdlife, the Camargue forms the largest delta in Europe. Saltwater marshes protect inland lagoons known as étangs, some of which are larger than nearby cities.

The Camargue is also one of the only places in Europe where it’s possible to see flocks of flamingos among 400 other bird species.

Horse-riding is a popular way of getting into the marshy landscape, and come face to face with Camargue horses and cattle close up.

Supplying Montpellier’s public fountains with fresh spring water since the 1700s, the Saint Clément Aqueduct directs the water 14 kilometres to a tower in Peyrou by nothing more than the force of gravity.

It is also known as les Arceaux, or the Arches, for its remaining 800-metre length of double arches that rise 22 metres and have a distinctly Roman feel.

Though just a short distance east of the Fabre Museum in Montpellier’s old town, the Antigone district has a very different vibe.

One of the more contemporary neighbourhoods in the city, Antigone can be thought of as centring around the Allée Henri II de Montmorency. Running roughly west-east, this wide boulevard heads towards the left bank of the River Lez.

Here, high-end restaurant terraces provide a serene escape from the centre of the city, while the area’s proximity to university faculties ensures there’s enough choice for everyone’s tastes and pocket.

Adopting a neoclassical motif when Antigone was designed in the 1970s onwards, the mastermind behind what stands today was Spanish architect Ricardo Bofill, who sketched out not only its buildings but also its street furniture and landscaping.

Only two of the 25 medieval watchtowers now remain that once ringed Montpellier as part of its defences.

Both date to around the year 1200, with the Tour des Pins later acting as a private dwelling, prison during the French revolution, home to the Sisters of Madeleine, and then the city archives.

The tour only received its current name at the start of the eighteenth century, due to the presence of self-seeded pine trees (pins) growing from the top of its 30-metre height.

The second tower is known as the Tour de la Babote. It was rebuilt in the early 1700s as an observatory. According to legend, it was the site of one of the very first parachute jumps, when Sébastien Lenormand tested his invention way back in 1783.

Montpellier may not be located exactly on France’s wondrous Mediterranean coast, but that doesn’t mean you can’t have a little beach time when visiting the city.

Just 13 kilometres and a tram ride away is Carnon Plage. It is a popular spot, and not just because it’s the closest stretch of sand to the city.

Quite large, there’s generally more than enough space for everyone, be they a couple looking to soak up some sun or a young family wanting to play in the shallows.

To avoid standing out among the locals, head there in the cool of the late afternoon and stay for an evening meal before heading back to the centre.

Less than an hour away, Nîmes plays host to the Roman artefacts missing from Montpellier but common in much of the rest of the region.

Its most famous relic is its arena, dating from around 70 AD. As one of the best-preserved amphitheatres from the Roman era, it’s still used for summer concerts.

Other important monuments include the white columned edifice of the Roman temple called the Maison Carrée (Square House), again regarded as one of the best of its kind outside Italy.

Built in honour of the grandsons of the Emperor Augustus Caesar, it is only bettered by the multilevel Pont du Gard aqueduct, a wonder of ancient engineering.

Run by the University of Montpellier 1, the Jardin des plantes is a 4.5 hectare botanic garden first created in 1593.

The oldest garden of its type anywhere in France, it was used as a model for its younger sibling in Paris.

Its arboretum dates back at least two centuries, with the orangery and various greenhouses dating from the mid-1800s.

Five hundred of the garden’s more than 2,500 plant species are native Mediterranean species, with the entire collection including succulents, aquatic plants, and varieties from France’s former empire.

A favourite among hikers thanks to a series of marked trails, this mountain 20 kilometres north of Montpellier is also widely praised for the quality of its wines.

Bottled under a sub-label of the Languedoc appellation, the majority of its wines are red and rosé, made from the grenache and syrah varieties of grape.

The mountain is said to be named after Thieri Loup, a medieval knight who returned from the crusades only to find his lover had died and took to the mountain to mourn.

Whatever the truth of this story, there’s no doubting the beauty of Pic Saint-Loup, whether you pull on your walking boots or opt to sample the region’s wines.


15 Best Things to Do in Montpellier (France):