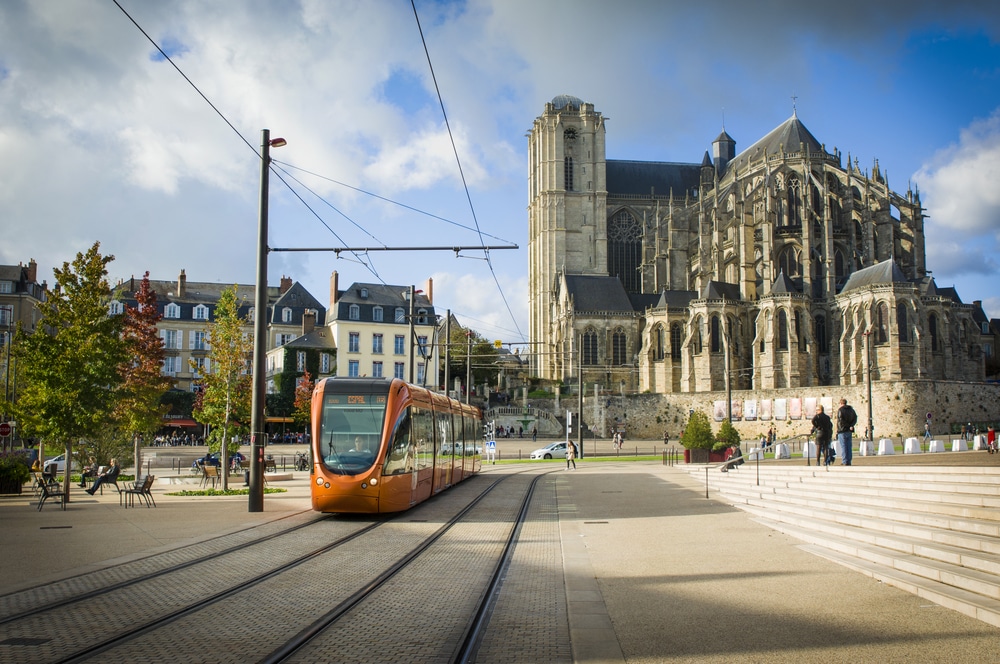 Le Mans is famed for its 24-hour motor race, which was born out of the city’s vehicle industry in the early 1900s.

But the city’s foundation lies back in pre-Roman times. Birthplace of England’s Henry II, its ancient heart has remained largely intact, protected for centuries by walls built by Roman legionaries.

Located on the Sarthe River in northwest France’s Pays de la Loire region, Le Mans is capital of Maine province, and just two hours away from Paris by road.

Here are the 15 best things to do in Le Mans.

Also called Vieux Man, or the Old Town, the Cité Plantagenêt comprises 20 hectares of timber-framed medieval and stone renaissance-era buildings lining cobbled streets that centre around the right bank of the Sarthe.

Separate from the modern city, its many attractions include the Grabatory Palace, which is the residence of the bishop of Le Mans, and the Palace of the Counts of Maine (now the Town Hall) where Henry II of England was born.

Constructed in the third century AD, the cité’s Roman walls form a rectangle around it, and are one of the most complete Gallo-Roman walls in existence today.

Breaks in the walls allow visitors to follow the steep stone public staircases down to the banks of the river, while the summer months see them lit up after dark.

One of the largest cathedrals in France, the construction of Saint Julien cathedral spans at least four centuries.

Notable for its stunning series of carved flying buttresses on its eastern exterior, its from the interior that the group of 20 twelfth-century stained-glass windows are best observed.

Its Ascension Window dates from 1120, making it one of the oldest stained-glass windows in the country.

The cathedral is also the burial place of Geoffrey Plantagenet, Count of Anjou, husband to Empress Matilda, and father to Henry II.

At the main entrance look out for the 4.5-metre high stone menhir, a pagan fertility symbol some 7,000 years old which Saint Julien, the city’s first bishop, saved from destruction in the fourth century AD.

This museum is a major museum in the city. Housed within the former bishop’s palace, its collection of ancient Egyptian antiquities includes a reconstruction of the tomb of Queen Nefertari.

Its gallery of artworks range in date from the fourteenth to the twentieth centuries. It is especially strong on Italian Primitive paintings, with the later periods less well represented.

However, among several dozen lesser-known artists are works by famous names including a landscape by John Constable.

Next to the museum is Parc du Tessé, which is itself dotted with artworks, including a giant hour glass by Jean-Bernard Métais.

Situated between avenue François Mitterand and rue du Port, the Place de la République is one of the city’s main public spaces.

Around it are positioned some of Le Mans grandest buildings. These include the Bourse, or Stock Exchange on its southern side, now occupied by the Chamber of Commerce.

Opposite it is the slightly later Crédit Lyonnais building, finished in around 1900, which takes architectural themes from across the preceding centuries.

Most important of all is probably the Chapel of the Visitation. Thought to be one of only a handful of Regency-style buildings in the west of France, it dates from 1723 and has a unique exterior lantern comprising more than a dozen bells.

A continuation of the Parc du Tessé, the Quinconces des Jacobins was created in 1792 by an engineer called Louis Bruyère on a site previously used by a Jacobin convent.

Created in a landscape style with artificial rivers running through it, it projects the atmosphere of a forest, but right in the centre of Le Mans.

Once the site of a Roman arena, its large esplanade hosts a variety of events throughout the year. Nearby, a statue of Icarus taking to the skies marks the early demonstration of flying in the city by Wilbur Wright in 1908.

This museum is named after Bérengère de Navarre, queen consort to England’s Richard the Lionheart. Legend has it she died in one of its three former houses that form the museum in 1230.

Inside its fifteenth-century wood-built structure it houses regional artworks and other items relating to the history of the area.

Incorporating traditional pieces of furniture, ceramics, glassware, and clothing from previous eras, it reminds visitors of Le Mans’ rural past.

A collection of pewter metalwork can also be found on the first floor, with the main gallery of photographs and paintings one storey higher.

Developed to protect the characteristic landscapes of hills and rivers, it also encompasses a number of attractive villages that together have a population of 80,000 people.

While visitors can enjoy the park from any location, there is a visitor centre and restaurant in the grand Courboyer manor house in Nocé, where you can also get close to Percheron horses and Norman cows.

Nocé is approximately an hour northeast of Le Mans by road.

Just ten minutes southeast of Le Mans in the town of Yvré-l’Évêque is the Royal Abbey of Epau. As a Cistercian abbey, it was founded in 1229 by Queen Bérengère.

Situated on the River Huisne, it continued in its religious role right up until the French Revolution in the 1780s and 1790s.

At this point it was converted into nothing more than an outbuilding for local farmers. It wasn’t restored to its former glory until the late 1950s.

Now everyone can enjoy the thirteenth century splendour of the church and chapter house among other interesting attractions that include the queen’s tomb.

Lost to the public until 1980, the ruins of Le Mans’ Roman Baths, known as the Crypte Archéologique des Thermes Romains, are still almost hidden from view beneath the Ecole Supérieure des Beaux Arts.

Discovered by accident during the building of the school, the remains are clear enough to determine each of the individual chambers, as well as the underfloor heating system that kept the baths warm throughout the year.

The surrounding exhibition helps explain what Le Mans would have looked like during the first to the third centuries when the baths were constructed and utilised, alongside a video that helps reconstruct the baths virtually.

Also known as the Jardin d’Horticulture du Mans, this botanical garden is a fantastic green space of eight hectares of mature planting and attractive flower beds.

The garden was laid out in the three years from 1867 to 1870, and designed by Jean-Charles Adolphe Alphand, who was also the visionary behind the Bois de Boulogne in Paris.

A large pond and naturistic setting can be found in the four-hectare English garden, while the slightly smaller French garden comprises crisp planting and a terraced walkway.

The two sections are linked by small tunnels.

The famous 24 hour Le Mans Circuit race track first opened in 1923. With a total length of just under 14 kilometres and no less than 38 turns, the lap time record sits at three minutes 17 seconds.

In addition to race day each June, the circuit is open most of the year round for anyone who wants to try their had at the circuit, whether in a car or go-cart.

At the main entrance, there is also the museum of the race, which contains some 150 vehicles, alongside mementos and objects that demonstrate the importance of the car industry to the city.

The circuit is just 20 minutes from the centre of Le Mans.

Papéa Park in nearby Yvré-l’Évêque is a family-friendly amusement park. It has more than 40 rides and other attractions, including a circus that puts on daily shows.

Mostly outdoors, there are also plenty of places to sit down with a picnic in the 25-hectare site, which can be glimpsed at speed from the various rollercoasters and other amusements that take advantage of the location.

The largest amusement park in the Pays de la Loire region, Papéa Park also has a large pool area with lots of water games that’s particularly popular in the high summer months. The park is open from April to September.

13. Museum of Archaeology and History

Permanently closed in 1940 but reopened in 2009, the city’s archaeology museum has a main exhibition space of 1,400 square metres.

The space is split chronologically into five sections, beginning in prehistoric times. Other sections uncover the history of Roman Le Mans, while the last focusses on the Maine area in the medieval period, when it was the power base of the Plantagenet family.

Look out for the Plantagenet enamel, which depicts Geoffrey Plantagenet with a shield of the three lions of England, and the carved stone tomb lids of the Recumbent Room.

The museum, is also known as the Jean-Claude-Boulard Carré Plantagenêt Museum.

Just an hour south of Le Mans by road, the French city of Tours has a series of attractions that range from its Roman amphitheatre, one of the largest in the Empire, to its Fine Art Museum.

Nicknamed Le Petit Paris, its historic heart is a UNESCO World Heritage Site, while Tours is also proud to be considered a garden city.

Among many treasures that have survived the centuries is its majestic fifteenth-century Cathedral of Saint-Gatien, the Château de Tours, and the seventeenth-century Pont Wilson.

The city’s oldest bridge, it stretches 500 metres across the Loire, and is named after the much later US President Woodrow Wilson, in power during the First World War.

Le Mans was the headquarters for Nazi Germany’s 7th Army during the Second World War.

The Dollmann Bunker, or Blockhaus Dollmann, is an underground lair from where General Friedrich Dollmann commanded troops facing the Allied invasion of Normandy’s beaches in 1944.

Complete with relics from the era in question, the site at Berthelot College is run by enthusiastic volunteers.

It survived the war largely undamaged, unlike other command posts closer to the action, making it a rare example of its kind.