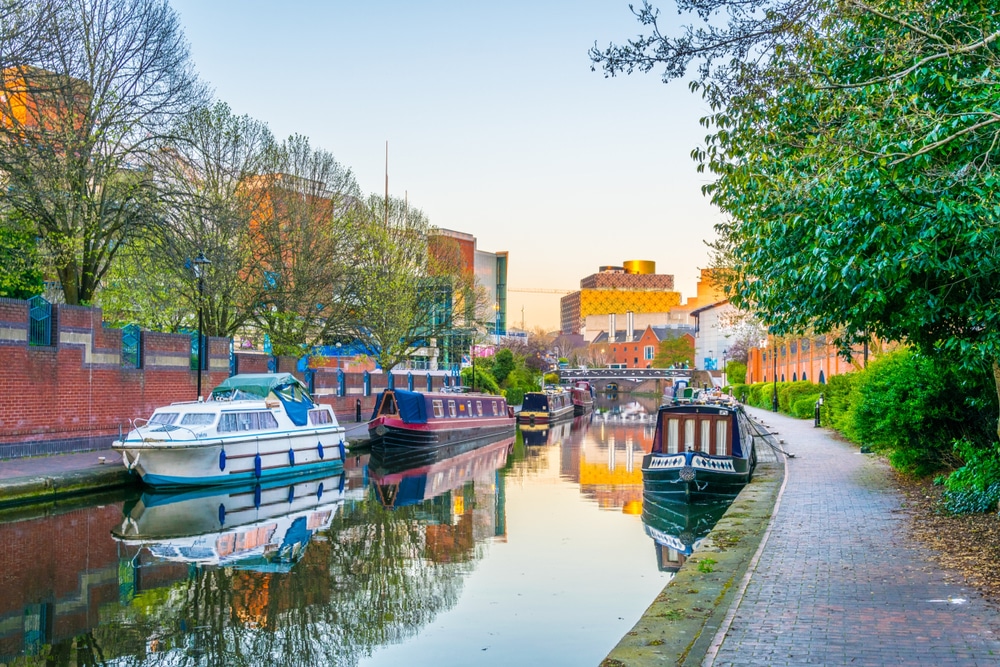 Once known as the workshop of the world, Birmingham has undoubtedly carved its place in history and cemented its place in the future of modern Britain. Located in the very centre of the country, Birmingham is a bustling metropolis of over one million people and has a vibrant city-culture to match.

Wander through the modern heart of the city and embrace the plethora of restaurants, cafes and its bustling nightlife. If art and culture are more to your liking, Birmingham is also home to fine art galleries, historical museums and live music venues that have given birth to genre-defining bands and artists.

The following 15 things to do in Birmingham will provide fantastic days out, whatever your taste may be.

Undeniably one of the city’s finest looking buildings, Birmingham Museum and Art Gallery is a must-visit when in the city. What lies inside is even more intriguing – one of the most extensive collections of pre-Raphaelite paintings in the entire world.

With an ever-changing repertoire of exhibitions, the Birmingham Museum and Art Gallery is a venue that is full of surprises and one that has its fingers firmly on the pulse of up and coming artists.

Whether it be an exhibition on historic figures and well-celebrated artists or a frank look at modern society and the times we now live in, the Birmingham Museum and Art Gallery presents all walks of life.

2. Brindleyplace and the Canal District

Birmingham can be forgiven for trying to compete with Venice for its myriad of canals. Once the city’s industrial heartlands, the canals now offer city dwellers a different type of landscape to admire, and a breath of fresh air from the traffic-laden streets.

Much of the canal quarter and building fronts were converted during the late ‘90s and early ’00s, creating an upmarket waterfront full of character and charm. Sip cocktails by the canalside or enjoy a three-course meal in one of the revamped buildings that now make up this iconic area of the city.

Crammed with restaurants and bars, Birmingham’s Brindleyplace is the perfect example of a city breathing new life into its dormant industrial past.

Located in the Bournville region of Birmingham, about a 20-minute drive from the city centre, Cadbury World is where Charlie and the Chocolate Factory comes to life. Perfect for both children and adults alike, Cadbury world tells the history of chocolate, from its uses in ancient Central America, right up to the modern confectionary that we enjoy today.

Built on the world-famous Cadbury factory site, Cadbury World represents a brand and product as famous as the city of Birmingham itself. After filling yourself with free samples of Cadbury’s chocolate delights, take a walk around the local Bournville area – once a model village constructed for the factory workers of Cadbury.

This 15-acre botanical garden, located in the green Edgbaston area of Birmingham, is a nature-based antidote to the hustle and bustle of such a busy and modern city. First opened in 1832, Birmingham’s horticulturalists have enjoyed these historical gardens for nearly 200 years.

The gardens contain over 7,000 varieties of plants, and these include the British National Bonsai Collection and Himalayan Cedar trees, both of which were developed from seeds planted in the mid-19th century.

Alongside this vast amount of rare plant life, the garden is also home to sensory gardens, designed purposely with specific plants that will tickle all of the senses and are ideal for families with young children.

Located at the very eastern edge of the city, the National Motorcycle Museum is a must-visit for any two-wheeled petrolhead. The museum houses the largest collection of British motorcycles in the world, boasting some 1000 plus machines that are all fully restored to the manufacturer’s original specifications.

Aside from this vast collection of motorcycles, the museum also plays host to several yearly events, making it a popular day out for the entire family. These events include workshop days, a classic bike day and even non-motorcycle based events.

Located in the Midlands transport hub and with Birmingham International train station only minutes away, accessing this museum is surprisingly easy, despite sitting on the edge of the city.

Listed among the top ten concert-hall acoustics in the entire world, Birmingham’s Symphony Hall is an iconic landmark and ranks amongst the best of the many music venues that the city is famous for. Opened in the early ‘90s, the hall is home to a vast 2,262 capacity, creating an atmosphere unmatched by many other similar venues.

The Symphony Hall hosts over two hundred events every year, with an impressive variety of genres and styles to match. From classical concerts, jazz performances and spoken word, to educational and community performances and everything else in between, there is something for every visitor at Birmingham’s Symphony Hall.

Once famed for its unmatched skill in all things gold, silver and diamond, Birmingham’s Jewellery Quarter is now one of the city’s most hip and unique areas.

The Jewellery Quarter also plays hosts to an array of popular public houses and bars that make it a great place to visit during the evening hours. These independent pubs, bars and boutiques all give the Jewellery Quarter its famous and lively atmosphere that continues into the early hours of the morning.

A few short miles south of Birmingham city centre is the historical hamlet of Sarehole, now part of the Hall Green area of the city. It is here that the famous high-fantasy writer and Oxford English professor, JRR Tolkien lived during his early years.

Tolkien’s childhood home stands opposite Sarehole Mill, a grade two listed watermill that was an inspiration in Tolkien’s later works. The nearby ‘Moseley Bog’ has also been noted as an inspiration for Tolkien’s Shire in both the Hobbit and Lord of the Rings novels. Every year a ‘Tolkien Weekend’ event is hosted nearby, celebrating the life and works of Tolkien himself.

In a city full of sporting endeavours, there is no bigger sporting landmark than Aston Villa’s Villa Park Stadium. Home to an enormous 42,000 seating capacity, the atmosphere at this premier league club on match day is one that gets the emotions flowing. Attending a football game at Villa Park is the best way to experience the stadium in all its glory.

To catch a glimpse of the behind-the-scenes action and a view of all that goes on at a premier league stadium, take the Villa Park tour. This tour will take you through the changing rooms, trophy displays and right out into the player and managerial dugouts.

The Birmingham Hippodrome is the most popular single-auditorium theatre in the whole of the UK, and it is easy to see why. Home to a myriad of shows and performances, the Hippodrome is the favourite destination for West End shows touring outside of London, and this is also true of dance, plays and ballets.

Visiting the Birmingham Hippodrome allows you to enjoy your favourite musical or a new show from the Birmingham Royal Ballet on the big stage. The theatre’s location means that after the show you can easily venture into the city for a post-theatre meal or cocktail.

The Bullring shopping centre is one of the most popular of its kind in the entire United Kingdom, welcoming up to 36 million visitors every year. The wide range of stores and chains available to shoppers makes it an attractive place to enjoy a little retail therapy.

The Bullring has long been the centre of trading in the city. From its early days as Birmingham’s premier marketplace to its modern construction in the 1960s, right up to the contemporary revamp after the millennium. The Selfridges building, in particular, stands out as one of the city’s significant landmarks and has won numerous awards for its architectural design.

The city of Birmingham has more Michelin Star restaurants than any other city outside of London, and this quiet food revolution has gone somewhat unnoticed. Restaurants such as Simpsons, Adam’s, Carters and Purnells all raise the bar in Birmingham fine dining and prove that it is high on the list of English culinary cities.

More and more high-end independent establishments are popping up all of the time throughout Birmingham, and now more than ever we can see a definite rise in quality and refinement throughout the city’s dining scene.

Birmingham is home to one of the premier cricketing locations in all of England, Edgbaston. Arguably one of the most atmospheric grounds in the entire country, watching a game of cricket at Edgbaston is a fantastic experience for lovers of the game.

Located just south-west of the main city centre, Edgbaston is an area of Birmingham noted for its lush green scenic landscapes, making it an ideal location for the home of Midlands cricket. Those coming to the city searching for something quintessentially English can do no better than watching a game of cricket at Edgbaston.

Nothing seems to have catapulted the city’s popularity more than the hugely successful TV series, Peaky Blinders. Now, fans of the show can immerse themselves into the world of the Peaky Blinders by enjoying a tour of the city, seen through the lens of the show.

Fans can visit the Lock-up at Steelhouse Lane police station where some of the real-life gang were incarcerated or take a Peaky tour of Digbeth, one of the areas famed for its tours. Venture a little further out of the city to the Black Country Living Museum and take a tour of the TV show sets.

The famous Grand Hotel in the heart of the city has recently gone through an 18-year closure and a multi-millionaire refurbishment. A grade 2 listed building, the Grand Hotel has played host to a vast array of famous figures throughout history and is now back open with a new lease of life.

Step through the doors of the Grand Hotel and explore the Art Deco interiors, the Grosvenor Ballroom and the brand new garden terrace.


15 Things to Do in Birmingham (England):