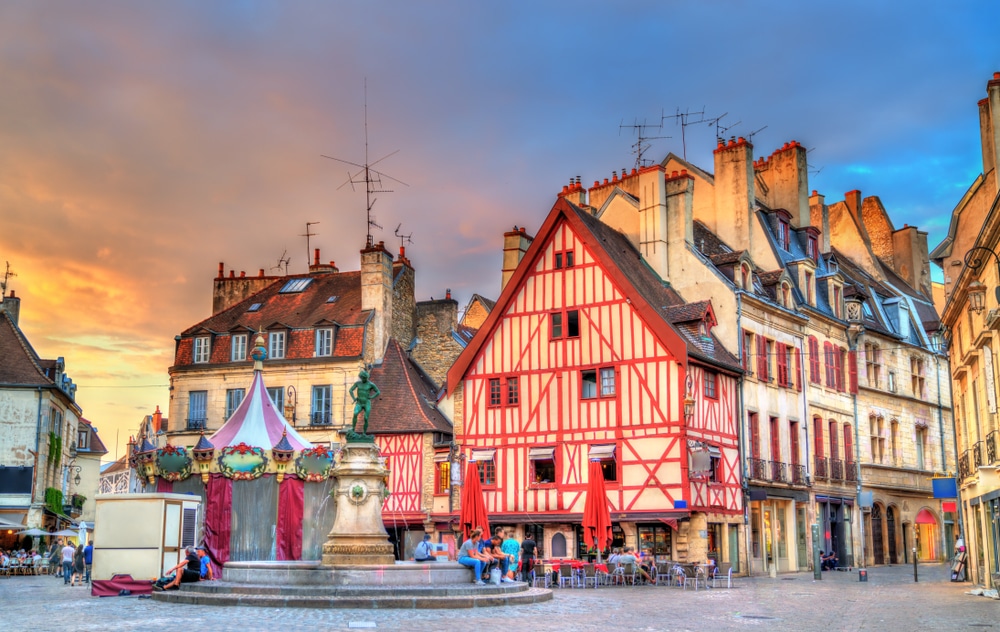 Situated within France’s Bourgogne-Franche-Comté region, Dijon is located in the north-eastern quarter of the country, just 1.5 hours from Paris by high-speed train.

Known since at least Roman times, it came to prominence during the eleventh to fifteenth centuries when it was the home of the Dukes of Burgundy.

These men were either members of the French royal household or powerful rivals to it, making the city one of the great European centres of art and science during this time.

Though annexed by France in 1477, and occupied several times since by enemy forces, the city has managed to retain much of its historic and cultural importance.

Here are the 15 best things to do in Dijon.

1. Palace of the Dukes and States of Burgundy

Begun in 1364 but not considered complete until almost 400 years later, the palace became a royal residence when Dijon became part of France under Louis XI.

Occupying various functions since then, the mix of medieval and later architecture is a delight, while the recently-renovated hall of the tombs of the Dukes of Burgundy is an absolute showstopper.

Rivalling this is the uninterrupted panoramic view of the city from the heights of the square 46-metre Tour de Philippe le Bon. The 316 steps to the top are definitely worth it.

Beyond the Palace of the Dukes and States of Burgundy the historic heart of Dijon is a joy to wander around.

Largely pedestrianised, and with a laid-back and unhurried ambience of people enjoying life, it was made a UNESCO World Heritage Site in 2015.

Walk its streets for yourself and you’ll soon realise why. Half-timbered buildings that jut out over the smooth cobbles stretch much of the way along Rue de la Verrerie, while all around are other places of note.

If you’re gastronomically minded, don’t miss Rue de Boussett or Rue des Forges either, with its array of gourmet food stores with window displays to die for.

Located in a building attached to the Palace of the Dukes and States of Burgundy, the Museum of Fine Arts is one of the oldest public museums in France.

First opened in 1787, today the gallery consists of 50 rooms hung with around 1,500 different artworks. They come from ancient Egypt, including rare mummy portraits, to the Middle Ages in particular.

Among them is a sixteenth-century tapestry depicting the siege of the city by Swiss forces in 1513, which has become an important guide as to how Dijon appeared at this time.

Dijon Cathedral is dedicated to Saint-Bénigne, Burgundy’s first Christian martyr. It is a Gothic masterpiece dating from the 1280s, although its crypt is more than 1,000 years old.

Its relatively plain main entrance sits between a symmetrical if stumpy tower to either side. The interior is also noted for its subtle decorative style, which helps to emphasis the stained glass of its windows.

The cathedral houses the tomb of Philippe le Bon, the fifteenth-century Duke of Burgundy, while the sarcophagus of Saint-Bénigne can be seen in a recess in the crypt.

Its roof is a fine example of the region’s tiled terracotta roofs that combine, black, green, and yellow in repeating patterns.

A short walk east of Dijon Cathedral, this botanic garden covers two hectares of land within a larger park.

It takes its name from its sixteenth-century role as a training ground for soldiers learning to fire the arquebus, an early form of gun.

Consisting of naturalistic tree cover and neat planted beds in turn, the 4,000 species of plant found here are largely native to the Burgundy region. Its greenhouses contain Mediterranean, subtropical, and succulent species.

Visitors to the gardens also get to enjoy the population of ducks, swans, and geese that have made their home here.

The self-styled ‘French capital of gingerbread’ (pain d’épices), Dijon is a wonderland for anyone who likes this sweet treat.

The kitchens of Mulot & Petitjean have been turning out the confection in the city since 1796. Generation after generation of the family business have learnt the secrets that have had customers returning to their shop on Boulevard de l’Ouest for more than two centuries.

Always handmade, the company has been given the Living Heritage Company award. Still using its original production site, today it also includes a small museum, in addition to the overpowering aroma of freshly-baked gingerbread.

One of 23 regional contemporary art galleries dotted across France, FRAC Bourgogne aims to bring the contemporary artists and artworks of the Burgundy region to the attention of the wider public.

One of the first FRAC centres to include public exhibition space, the Bourgogne collection began in just 1984.

Despite this, it contains almost 700 works by close to 300 artists, including well-known names such as Gerhard Richter and Gloria Friedmann.

For many, the name Burgundy goes hand in hand with bottles of red wine. The Vosne-Romanée vineyards are located just twenty minutes by road from Dijon.

Very well-regarded by wine aficionados, the town’s wines have a special AOC (appellation d’origine contrôlée) designation that guarantees the pinor noir variety of grapes used come from the area.

Vosne-Romanée alone has no less than six Grand Cru (i.e. excellent) vineyards, including Domaine Romanée-Conti, which produces some of the most expensive wines to come out of France. A bottle can have a price tag of $20,000.

The Church of Our Lady of Dijon has an unusual Gothic square frontage that reminds many of the palaces of the Grand Canal in Venice.

Started in around 1230, the church contains the statue of Our Lady of Good Hope, also known as the Black Madonna, which has been prayed to on several occasions in the city’s long history to protect it from danger.

It also contains a quirky bell-striking automaton known as a jacquemart on the exterior of the short tower, and a carved owl that is said to give good luck to anyone who holds it in their left hand while making a wish.

The Jardin Darcy, or Darcy Garden, on Place Darcy is a small urban public garden with the sense of the estate around a stately home.

Boasting a neo-Renaissance splendour, it was laid down in the 1880s, and has at its centre a large stepped reservoir of water decorated with sculpture and balustrades.

Other artworks within the one-hectare garden include the polar bear at the entrance, which is a reproduction of François Pompon’s statue in the Musée D’Orsay in Paris.

Another is the Youth Fountain, decorated with smiling children gazing down at bronze frogs, which won’t fail to bring a smile to your face.

The Magnin Museum occupies the Hôtel Lantin, a seventeenth-century hôtel particulier mansion donated to the city alongside its contents by Maurice and Jeanne Magnin in 1938.

Set out as the family home, and also displaying the cabinet of curiosities collected throughout Maurice’s lifetime, the museum contains around 2,000 different pieces of art.

As a result, visitors will discover a series of grand rooms complete with large crystal chandeliers, ornate furnishings, and intricate inlaid floors.

But between them you will also find gallery-like spaces hung with the works of artists including Pieter Brueghel the Younger and Paul Delaroche.

The Well of Moses is a stunning work of sculpture created by a Dutch artist by the name of Claus Sluter with his nephew between 1395 and 1403.

Encircled by painted life-sized figures in stone from the Old Testament, including Moses, King David and the Prophet Jeremiah, the work was intended for the monastery of Chartreuse de Champmol.

Now a hospital, the monastery was built as the final resting place of Duke Phillip the Bold. Accessible to tourists, the hospital is situated three kilometres due west of central Dijon.

The Route des Grands Crus, or Roadway of the Grand Crus, is a specially-design tourist path. It begins in Dijon and ends in Sanenay 60 kilometres to the south, but covers an area no more than two kilometres wide at any point.

Dotted with more than 30 attractive towns and villages, the route is none-the-less centred around the region’s celebrated vineyards.

It takes in many of Burgundy’s AOC areas, through vineyards of the Côte de Beaune, and over the Hautes-Côtes hills than run above many of the vines.

Dijon’s Porte Guillaume is a monumental archway dating back to the eighteenth century.

Constructed in 1788 on the site of one of the city’s medieval gateways, it was put up to honour the Prince of Conde, the then governor of the region.

Like a smaller version of the Arc de Triomphe in Paris, the Porte Guillaume is decorated with a series of bas-reliefs depicting the Muse of History and City of Dijon as a woman greeting the sun.

Those interested in American history will also be attracted to the plaque dedicated to Thomas Jefferson, who was the US ambassador to France before becoming the third president in 1801.

The Musée de la Vie Bourguignonne is a folk museum with displays of both urban and rural ethnography dating from the eighteenth to the twentieth centuries.

Spread across three floors in the converted cloister of a Bernardine convent, its exhibits include traditional clothing, furniture, and items of everyday life from these periods.

Its ground and first floors lead visitors through the history of Burgundy right up to the Second World War – when Dijon was occupied by Nazi forces but thankfully suffered less damage than other French cities.