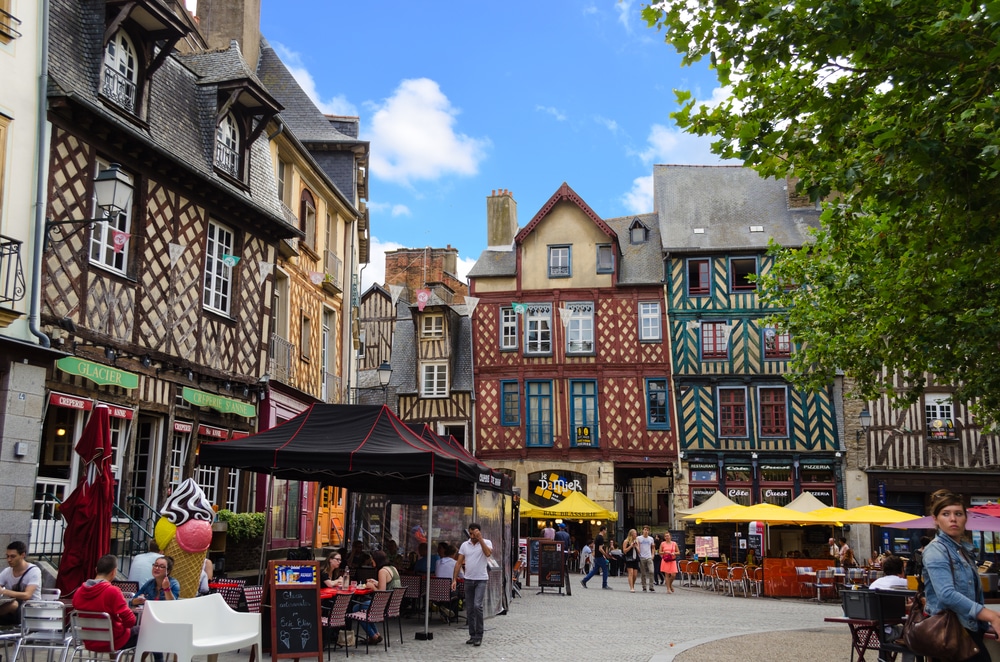 The capital of Brittany in northwest France, Rennes is recognised throughout the country as a city of art and culture.

Named the most liveable city in France by news magazine L’Express, it manages to successfully combine a long history with modern innovation.

From medieval streets to modern museum spaces, here are the 15 best things to do in Rennes.

Dating back to the city’s medieval period, the historic centre of Rennes is a quaint quarter of narrow alleys lined with tall half-timbered buildings so old they appear to lean on each other for support.

One of the largest collections of buildings from this period in France, with almost 300 in total, it’s easy to get a sense of what the city must once have been like.

As attractive as they are ancient, the structures each have their own personality due to the different ways in which the timber-fronting has been used – from straight vertical lines to herringbone patterns and even flower-like rings.

The cobbled streets of Psalette, Saint-Sauveur, and Le Chapitre are probably the most haunting.

Rennes’ Museum of Fine Arts has a prime location on the side of a canal basin, and a collection that ranges from the antiquities of ancient Egypt to art of the twentieth century.

Considered one of the most important art galleries outside of Paris, it was also one of France’s earliest, founded in 1794 during the French Revolution.

As was common during the period, many of its first works were confiscated from churches and other public buildings in the city. It expanded largely thanks to donations from Christophe-Paul de Robien, president of the Brittany Parliament.

Though spanning several millennia in scope, the highlight of the museum’s collection is its rooms dedicated to the seventeenth century. Here visitors will find works by Pier Paul Rubens among others.

The Roman Catholic cathedral of Rennes has a neoclassical main façade of columned towers that has stood over the surrounding cobbles for many centuries, although the structure was only finally completed in 1845 after being rebuilt several times.

Inside, the church continues the neoclassical look but an almost Byzantine appearance, as exemplified by the use of gilt work around the central nave. The decoration includes marble taken from the ancient Roman Forum by Pope Pius IX who gifted it to the cathedral, and an altarpiece dating to sixteenth-century Antwerp.

Playing an important part in the history of Brittany as an independent dukedom, its dukes were crowned here, having entered the city via the Portes Mordelaises after its doors were symbolically shut in front of their carriage.

Portes Mordelaises, or Mordelaises Gate, comprises part of the ancient fortifications of Rennes that helped give the city the nickname of ‘The Red’ due to the colour of its bricks.

Astonishingly, these walls were first constructed when Rennes was still known as Condate at the end of the third century AD. Today, 1,200 metres of wall still exists.

The Mordelaises Gate as it stands today was constructed between 1442 and 1452. It takes its name from Mordelles, the first district west of the gate when it was built.

Until the 1980s, the basement of the gate was the home to a nightclub.

This palace of legislature and the judiciary dates from the 1600s, although it took almost a hundred years for it to be finished both inside and out as a result of its grand architecture and decoration.

It was built to house Brittany’s former parliament after the region unified from more than 15 separate semi-independent states around this time.

More recently, it has become the site of the region’s appeal court, but continues to welcome visitors to its rooms.

The Great Chamber is especially fine, with a ceiling designed by the court painter to King Louis XIV, Charles Errand, who was also involved in the designs for the Palace of Versailles.

Bretons are proud of their regions’ long history, and there’s nowhere better to learn more about it than at the Musée de Bretagne.

Occupying the Champs Libres cultural centre, the Museum of Brittany’s collections total some 2,300 individual pieces, that move between ethnology, archaeology and the decorative arts. Glittering among them is a gold coin featuring the head of Anne of Brittany, who went on to marry France’s King Louis XII.

The museum also lifts the lid on many of the region’s customs and traditions.

A place for the citizens of Rennes to escape the city since the eighteenth century, Parc du Thabor spans ten hectares.

Within them visitors will find everything from an aviary to a rose garden, whose blooms span more than 2,000 different varieties of the plant.

Designed by a well-known landscape artist of the nineteenth century going by the name of Denis Bühler, the park was created out of a private garden belonging to the Abbey of Saint-Melaine.

It features formal French planting, and the freer style of English parks as it roams over the highest hill in Rennes.

The Espace des Sciences is far more than a science museum. Instead, it is a science centre, where visitors of all ages are able to get hands on with exhibits as they learn about the latest scientific discovers in various fields of expertise.

The Earth Centre concentrated on the benefits of our planet’s biodiversity, with the Merlin Laboratory space hosts most of the interactive experiments and activities.

The third floor plays host to a digital planetarium displayed on a 14-metre hemispherical screen. Like the Musée de Bretagne, you’ll find the Espace des Sciences in the Champs Libres building.

Unveiled to the public in 1734, Rennes City Hall is a charming pre-revolutionary building in the heart of the city that is also the location of Rennes’ panthéon, or memorial building.

Recognisable by its round clock tower and concave shape on Place de l’hôtel de ville, the current structure was designed by the king’s own architect after the previous building was lost to a fire alongside 900 homes across more than 30 streets.

Opposite the city’s opera house, the panthéon includes memorials to Duguay-Trouin (commander of the king’s navy in the 1700s), and writer Chateaubriand (after whom the steak is named), as well as remembering the dead from the two world wars and others since.

Although it’s the smallest opera house anywhere in France, it’s certainly not second tier when it comes to performances, and is certainly a better option than the real tennis courts where performances used to be held.

Italian in style, its curving columns are topped by Apollo, the ancient Roman god of the arts, alongside the Nine Muses.

Praised by author Stendhal, you can visit even if you haven’t managed to get a ticket for one of its performances by stopping at the Café Picca, now just as famous as the Opera itself, or by joining a guided tour that goes literally behind the scenes.

It may seem odd to suggest going for a swim while exploring the city, however the Saint-George swimming pool is another of Rennes’ wonderful works of architecture.

Still functioning as a public swimming baths, the Saint-George pool is probably the city’s finest example of art deco design, and has now been added to France’s list of important historic monuments.

A little hidden on the roadside by its planting, it’s certainly worth passing through the grand entranceway guarded by the face of Neptune, god of the sea, to see the structure and its mosaic decoration from the inside.

Brittany FRAC is one of a number of galleries across France funded by the Regional Contemporary Art Fund (or FRAC in French) designed to exhibit the best contemporary art of the moment.

Its whitewashed walls and polished concrete floor draw visitors’ eyes to the artworks, which range from traditionally-styled landscapes, to rather quirky sculpture.

Of this series of galleries, Brittany FRAC boasts one of the largest collections, with close to 5,000 artworks within its walls.

The gallery is located roughly ten minutes from the centre of Rennes in an almost mysterious black structure designed by Breton architect Odile Decq.

Roughly an hour by road from Rennes is Saint-Malo, a city of picturesque views that stretch from its church spires and historic ramparts to the island of Le Grand Bé.

Sitting on the English Channel, much of the money that constructed the city came from the hands of corsairs – in other words, pirates – who demanded payment from ships passing Saint-Malo towards or away from Britain.

On the island of Grand Bé, which can be reached on foot at low tide, visitors will find the tomb of Chateaubriand, and the remains of an ancient fort.

Within the city’s walls are several further attractions, including a corsair’s house dating from 1725, while not far away on the outskirts of Saint-Servan is a modern aquarium with a ‘shark ring’ tank where you can even spend the night.

Not only is Place des Lices an attractive place to people watch in its own right, but every Saturday it is also the location for the second largest food market in France.

Surrounded by Rennes’ half-timbered buildings, somewhere in the region of 300 producers mostly from the local area set up their stalls. Here you’ll find everything from fish brought straight from the docks, to cheeses that have been maturing for months.

Be sure to take the opportunity to sample some locally-produced galette sausage (a sausage wrapped in a crepe) while drifting between the food stands and those showing displays of bright cut flowers.

This 80-kilometre canal that connects to the River Vilaine at Rennes is a lovely way to get outside, whether that’s on foot, by bike, on horseback, or on the water.

Hire a boat or canal barge for the day and you’ll be able to experience the life of a boatman (or woman), traversing locks in between drifting slowly by Brittany villages.

But if you prefer, footpaths and cycleways can be found lining this canal, ordered by Napoleon Bonaparte while Emperor of France in 1804.