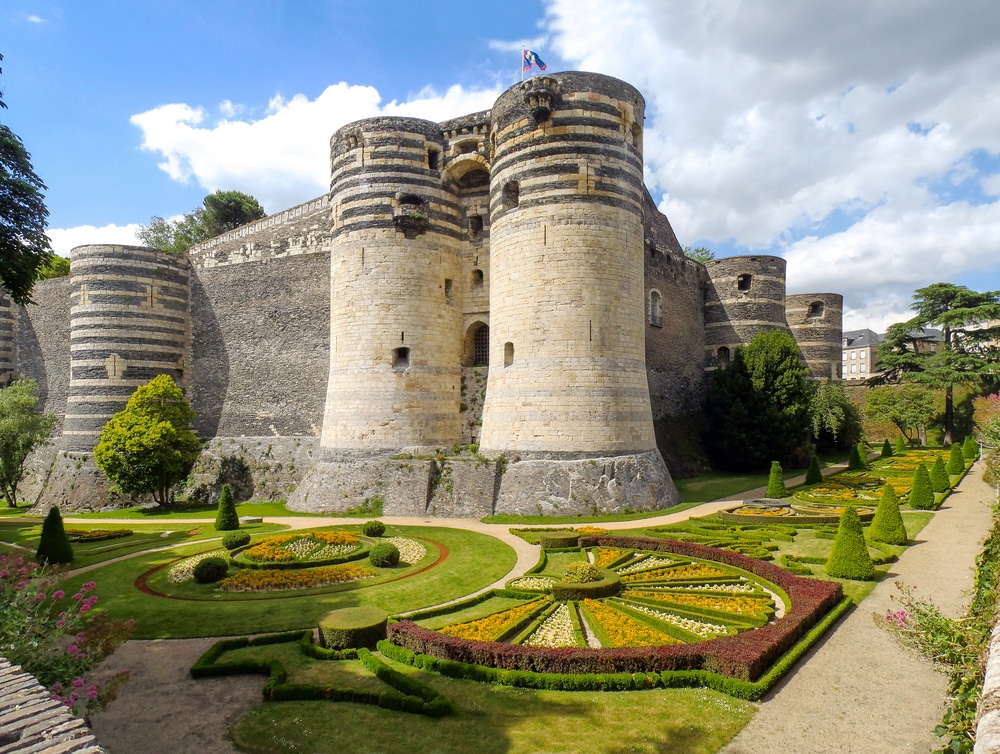 Split east-west into two roughly equal parts by the River Maine, Angers lies within the province of Pays de la Loire. Bordering Brittany and historically part of Anjou, it was the centre of the Plantagenet dynasty who went on to rule from England to the borders of Spain.

Rich in culture, human habitation of the region dates back some 400,000 years, though Angers first appears as a settlement in Roman times as Juliomagnus. Since then, it has quietly thrived, leaving a legacy of important architectural and artistic landmarks.

Once known as the ‘black city’ because of its slate mining industry, this today seems an odd epithet for a city brimming with life, whether that’s in bird nesting sites on its outskirts, or the thriving café scene at its heart.

Here are the 15 best things to do in Angers.

Having dominated Angers for centuries, its château has to be first on any list of the best things to do in the city.

The castle has a prime riverside location, from where it used to take the waters for its moat – now beautiful gardens.

Its bastion walls rise up supported by striped semi-circular towers that range in date from the ninth to the thirteenth centuries. Beyond, its courtyard contains a mansion fit for a queen.

It was the home to Blanche of Castile, French regent in the 1200s, and a variety of important figures since. Today it houses the Apocalypse Tapestry, the oldest and largest medieval tapestry in the world.

Angers’ Museum of Fine Arts occupies a series of interconnected buildings called the Logis Barrault that rival the castle in grandeur.

Like the city, it is divided into two parts. The first focusses on the history of Angers from stone age times right through to the present, showing pieces of archaeological interest such as polished axe heads.

The second part of the museum is dedicated to art from the fourteenth to the twenty-first centuries. Among several hundred works, visitors will find those of Brueghel the Elder, Monet, and Sisley.

Consecrated in 1096, Angers Cathedral blends the Gothic and Romanesque styles typical of the centuries over which the structure was built.

Its stained-glass windows are recognised as some of the most important surviving examples of medieval French glasswork, since those in many churches across the country were destroyed during the French Revolution.

Other significant works beyond the cathedral structure itself include a mural of the life of Saint Maurilius dating to the 1200s, and the final resting place of Margaret of Anjou, Queen consort of England and France after marrying Henry VI.

Sadly, the head of John the Baptist, that was guarded by the cathedral since the Fourth Crusade has been lost.

Right at the heart of Angers you’ll find the tranquil surrounds of the Jardin des Plantes. Covering four hectares, this botanical garden takes the form of an English garden, a style popular when it was redesigned in 1905 by landscaper Édouard André.

A contrast to the formal French gardens that can be found at the Château d’Angers, it is a space that is intended to look as natural as possible, while providing paths that allow the garden to be explored, and statuary that creates points of note.

Offering interest at any time of year, the garden has somewhere in the region of 60,000 plants.

Also known as the Maison des Artisans, the House of Adam is an impressive medieval corner house of timber construction that rises six storeys.

Its street-facing façades are a beautiful mix of carved woodwork, crosshatch patterns and gable roofs, making it perhaps the best of around 40 buildings from the period that survive to this day.

Named after the Bible’s first man, who can be seen in carvings at street level, it was constructed in 1491, the year before Christopher Columbus discovered America.

It takes its alternative name from the shop selling objet d’art from local artists on the ground floor.

The Cointreau Distillery, the only place in the world where the orange liqueur is produced, has stood at the same site in Saint-Barthélemy-d’Anjou just a short walk west of the city centre since 1849.

Its factory manages to produce 15 million bottles a year, that are then shipped right around the world, from this one location. More astonishingly, the process continues to use much of the original distillation equipment, including its rows of copper tanks.

Visitors are free to wander among them amid the scent of orange peel. The site also has a number of old posters on display, a bar to enjoy the finished result, and a shop where you can buy everything from bottles to Cointreau cake.

The short-lived River Maine flows into the much more famous Loire a few kilometres south of Angers. The point at which the two rivers meet is one of incredible natural beauty, and forms part of the Maine and Loire Rivers Loop.

Almost 19 kilometres in total, the loop can be walked in under five hours, or cycled along in around two, with dedicated flat paths the whole way.

What’s more, it leads adventurers into a UNESCO World Heritage Site because of its importance to the region’s plant and animal life.

Today the former Hôpital Saint-Jean has been reimagined as the Musée Jean-Lurçat, combining ceilings first constructed in the twelfth century with a series of ten contemporary tapestries together called Le Chant de Monde.

One of the oldest hospitals in France, it was built in 1175 in the regional Gothic Angevin style, and continued its medical role until 1870.

Created by Jean Lurçat, the modern tapestries stand as a deliberate counterpoint to the Apocalypse Tapestry of Château d’Angers.

Within the museum you’ll also find around 50 further works of needlepoint, which together guide visitors through the development of the art over Lurçat’s lifetime.

Uniting the idea of a botanical gardens with that of a theme park, Terra Botanica is unique in Europe.

Dedicated to explaining the natural world in all its glory, the park is spread over almost 15 hectares that consist of everything from butterfly houses and tropical glasshouses to a 4D cinema that takes viewers into T-Rex territory.

Boasting the world’s oldest discovered plant fossil within its collection, a bird’s eye view of the park can be had from the tethered balloon that rises 150 metres into the air.

Terra Botanica is just 15 minutes by road from central Angers.

The district of La Doutre has the Musée Jean-Lurçat to its north, making it one of the oldest quarters of Angers. It was once the area protected by the city’s walls, remains of which can be seen on Rue Toussaint and Boulevard Carnot.

It is also the area where you will find many of the city’s remaining half-timbered buildings and was popular with the upper classes in the 1800s.

Rue Beaurepaire is the centre of the shopping district, and incorporates the Abbaye du Ronceray. To the south lies the modern Quai theatre and the city’s port on the River Maine.

There can be no better place to admire works of sculptural genius that the Galerie David d’Angers.

Converted from the ruins of a thirteenth century church in the 1980s, the arched windows and subtle wall carving act as a perfect backdrop.

As you walk among blocks of stone chiselled to resemble the faces of Balzac and Victor Hugo, you will be bathed in the natural light that enters the space from the glass roof stretching along the length of the central nave.

As well as contemporary busts, you will also find copies of David d’Angers (Pierre-Jean David’s) most famous works, including the sculptures that adore the front of the Panthéon in Paris.

In addition to its natural beauty, the Loire Valley is also renowned across the globe for its wines. It would be difficult to pass a few days in Angers without coming across this fact in either a restaurant or shop.

However, one of the best ways to explore the region’s wine culture is by visiting one of its vineyards. Approximately 30 minutes by bus from Angers is the Domaine du Closel-Château des Vaults winery in the town of Savennières.

This family-run business has been pressing grapes into wine since the time of Joan of Arc in the 1400s, and provides an excellent example of the Loire’s top wines.

The Musée Pincé, or Logis Pincé, is a Renaissance mansion of towers and turrets built in the early 1500s by Jean de Pincé, the then mayor of Angers.

Today it is the site of an archaeological museum containing Greek, Roman and Egyptian antiquities. There is also a collection of Far Eastern artworks from China and Japan.

Anyone with even a passing interest in these subjects will find the museum a delight, with Greek bronzes leading onto rare articles of Roman glass and on again to Egyptian funeral ceramics among many other objects.

The Jardin du Mail is a beautifully laid-out garden beside Angers’ Town Hall.

It continues the tradition of formal clipped gardens of low box plant hedges in symmetry, while colour comes from its 20,000-30,000 annual blooms.

In addition, the garden contains a number of statues, a fountain by Barbezat, and a bandstand.

It takes its name from the game of ‘mail’ that used to be played here.

The waterways of the Loire and its many tributaries including the Maine were for many centuries the main way of travelling to or from Angers. They therefore provide an authentic way of seeing this city from an alternative angle.

With many of Angers’ most important landmarks facing the water, not least the Château d’Angers, a river cruise combines historic sights with natural settings outside of the city boundaries that are important nesting and feeding sites for a great many bird species.

A variety of cruises are available that take in all Angers and the surrounding region is known for.