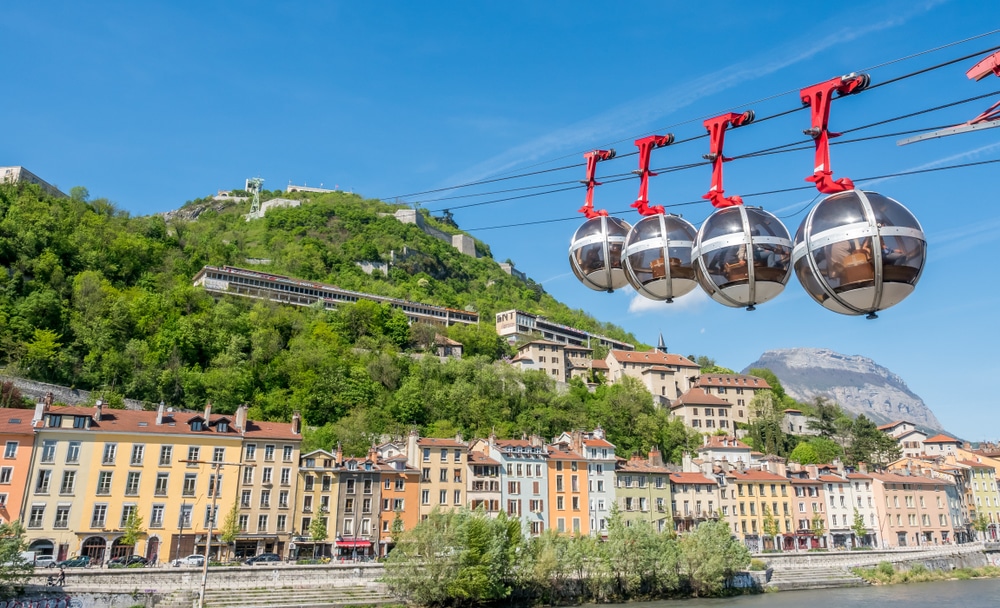 Delightful Grenoble sits in south-eastern France, in a plain formed from the confluence of the Drac and Isère rivers.

Surrounded by pleasant hiking country, it has adopted the mantel of ‘Capital of the Alps’ due to its proximity to these mountains, and has pistes as close as 15 minutes away by road.

But Grenoble also holds an important place in the history and culture of France from at least the French Revolution onwards. Re-affirmed when the city hosted the tenth Winter Olympics in 1968, it continues through innovation to this day, with Grenoble the European Green Capital of 2022.

With so much going on, here are the 15 best things to do in Grenoble.

While the Bastille in Paris is nothing more than an outline in the paving, the fortress of the same name in Grenoble is very much still in existence.

Overlooking the city from its hilltop perch, the Bastille was constructed in 1591 and consists of a tower encircled by perimeter walls 1.3 metres thick.

The fortress hosts a number of temporary exhibits each year in the Bastille Art Centre. The summit also plays host to the Museum of Mountain Troops, making it a great place to come and explore some of the region’s history.

Before departing, be sure to also take in the views, which stretch as far as Mont Blanc more than 100 kilometres away.

By far the easiest way to reach the lofty heights of the Bastille is by the Grenoble-Bastille cable car, although that’s far from the only reason to make use of the system.

One of the oldest urban cable cars in the world, it was installed in 1934. Its round gondolas, loving called ‘the bubbles’ by locals, link the Bastille with the city centre without the need to tackle the criss-cross of footpaths or steep road.

Not only do the gondolas sweep over the Saint Laurent quarter of the city, but also take in some of the lower fortifications that otherwise wouldn’t be accessible to the average tourist.

The only one of Grenoble’s quarters to lie on the right bank of the River Isère, Saint Laurent sits at the base of the Bastille’s mountain. However, you shouldn’t think you’ve seen it if you’ve taken the cable car to the fortress.

One of the city’s oldest quarters, Saint Laurent is full of interesting sites, from its fort-like gateway, the Porte de France (now a war memorial), to narrow streets splitting off from Rue Saint Laurent and Quai Xavier Jouvin.

The tiny Place de la Cymaise is perhaps the best place to begin discovering the quarter, since it lies at one end of the pedestrian footbridge across the river dating to 1909. Here you’ll also find the magnificent Lion Fountain.

The Jardin de Ville is a pleasant surprise for those who stumble upon it either from the riverside or from the steep-pitched roofs of the surrounding streets.

Facing the Maison de l’Internationale municipal building, once the city’s Town Hall, the garden is a small urban park comprises rectangular areas of lawn. These are edged by beautiful plants that are enjoyed by visitors, families, and the city’s student population alike.

Its air is filled with the scent of citrus trees and jasmine, while fountains trickle with water just out of sight, and statues add to the tranquil atmosphere.

If you’re travelling with little ones, there’s also a good children’s play area.

The extensive collections of the Musée de Grenoble range from the antiquities of ancient Egypt to twentieth century artworks.

Established in 1798, it is considered the first museum of modern art in the country, since it began its contemporary collection in 1920, earlier than either Paris or New York.

Its current structure dates from 1994, and increased the exhibition space by two thirds. Spread over 57 rooms, the permanent collection displays some 1,500 works.

Much of its ancient Egyptian artefacts came directly from excavations in the country, including those associated with Jean-François Champollion, the man who deciphered hieroglyphics.

Other works in the museum include those by Veronese, Rubens, eight paintings by Matisse, and four by Picasso.

The rather plain medieval exterior of Grenoble’s cathedral shouldn’t put you off wanting to visit this French national monument, which has a history stretching back 1,700 years.

Surviving both the Wars of Religion of the 1500s and the anti-religious fervour of the French Revolution, the interior contains Renaissance-era art of the highest order, including a stone screen (or ciborium) 14 metres high.

There are also rare wooden carvings from the seventeenth century depicting the life of Christ, which are beautiful as well as being of religious significance.

A much-loved green space within the city, Paul Mistral Park has an area of 27 hectares, making it the largest in the city.

It was originally created from a disused military training ground for an international fair on hydropower in 1925. Of this period, only the crumbling 95-metre-high octagonal Tour Perret remains, which was the first constructed from reinforced concrete in Europe.

The park’s pathways lead to a variety of other attractions, including various statues, a pond, and a stream.

The newly-constructed Stade des Alpes glistens with glass panels to one side, while dense woodland makes up the southern end of the park.

8. Palace of the Parliament of Dauphiné

Before becoming a part of France under Charles V in 1349, Grenoble was capital of the Dauphiné, a dukedom led by men who called themselves dauphins.

Faced with carvings, the structure has the appearance of a mansion taking up much of the length of one side of Place Saint-André. It dates from the fifteenth and sixteenth centuries, with regular extensions created throughout this 150-year period.

Since 2002, the building has contained Isère council.

It occupies a large glass and steel hall first built for the 1900 World’s Fair in Paris by the workshop of Gustave Eiffel, before being moved piece by piece and rebuilt in Grenoble.

Its two large-scale interior spaces are dedicated to a new exhibition or solo show every three months, so is well worth stopping by.

Le Magasin is situated roughly two kilometres west of the city centre, and is easily reached by taking tram A.

Of the 20 ski resorts dotted around Grenoble, Le Sappey-en-Chartreuse is the closest, and can be reached within 15 minutes by road.

It offers four kilometres of slopes for skiers and snowboarders, divided between easy and intermediate levels of difficulty, accessed via five different lifts.

Part of Chartreuse Regional Nature Park, there’s also plenty to experience outside of the skiing season, with its pine forests home to orchids, roe deer, and a full complement of bird species.

Alternative pistes can be found at Chamrousse, Les Duex Alpes, and Villard-de-Lans among many other nearby towns.

11. Museum of the Resistance and Deportation of Isère

This museum takes a sensitive look at one of the most horrific periods of Grenoble’s recent history – the occupation of the city by Nazi and Italian Fascist forces during the Second World War.

Established in 1966 by former resistance fighters and deportees, the permanent exhibition guides visitors through the war years with a specific focus on Grenoble and its wartime population.

Holding around 5,000 objects, it details the exploits of the city’s resistance movement – one of the most active in the country, and those deported either because of their religion or because of their politics.

Not only is this castle in Vizille one of the most important in the historic Dauphiné region around Grenoble, but it also contains the Museum of the French Revolution.

It was originally built in the early 1600s by François de Bonne, the Duke of Lesdiguières, to demonstrate his importance to the French royal family. It would later have a pivotal early role in the French Revolution.

After King Louis XVI limited the power of the Dauphiné parliament, the city’s inhabitants threw roof tiles down onto the king’s guard in the ‘Day of the Tiles’.

This in turn led to a meeting of important figures who began to formulate the ideas around the revolution, as visitors to the museum will learn for themselves.

With its enviable position amid the growing Alps, Grenoble is a great base for anyone who likes to get out on their two feet.

In fact, there is somewhere in the region of 800 kilometres of trails that begin, end, or pass through the city, taking in forests, hills, river valleys, and grassland largely untouched by the modern world.

They range from the family-friendly, such as the footpath running between Jarrie and Montchabond, to walks for which good equipment and previous experience is necessary, including the GR738, the high crossing between Belledonne to Chamrousse.

This cave complex 15 minutes from Grenoble has been an attraction since the Middle Ages. It formed over many thousands of years by the actions of the Germe, an underwater river that slowly ate away at the rock around it.

Visitors can still see and hear the river, in between slipping down its natural narrow tunnels for over one kilometre to the Flint Gallery.

A sound and light show tells the story of the legend of Mélusine, a fairy believed to have made the caves her home, while more natural wonders also include the waterfalls of the Furon.

The Maison de Culture, or MC2, concert hall and entertainment venue was created for the Winter Olympics of 1968.

It continues to attract talent from right across France and beyond, thanks to its award as a ‘national scene’ establishment.

With four auditoriums capable of seating up to 1,000 people each, and an annual budget in the millions of euros each year, the centre hosts regular performances, which vary as widely as from contemporary dance to drama.