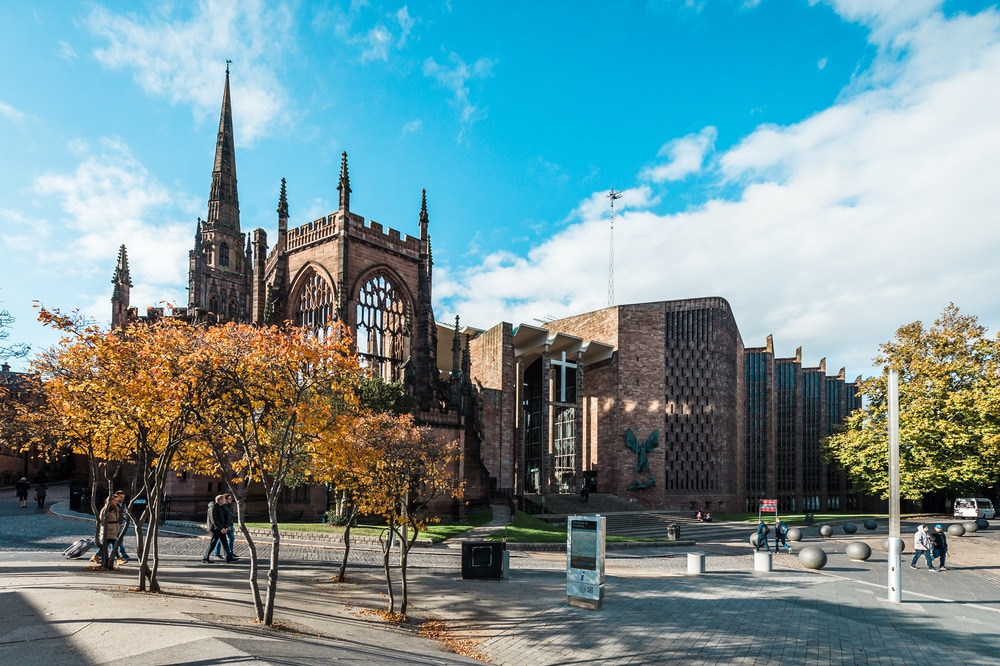 Lying at the very east of the West Midlands, Coventry has long been a city of national significance. Coventry secured its place as ionic English settlement during the late Medieval era when its St Michael’s Cathedral was one of the largest in the country. Throughout the Industrial Revolution Coventry was the centre of watchmaking and later on, the motorbike and car manufactory industries.

This industrial and historical past has blended perfectly into the modern era where the city’s musical and cultural identity has taken over. Simply scratch the surface of the West Midlands city, and you are sure to see more than meets the eye. Here are 15 things to do when in the city of Coventry.

With a long history of industrial and transport technology, there is no better place to visit such a museum than in the city of Coventry. The museum is home to, amongst many things, one of the largest collections of British made cars in the world. This museum is any car fanatics dream come true and makes for an exciting day out for the whole family.

The museum’s collection includes famous vehicles such as: an Austin Metro owned by Lady Diana, a Humber staff car that British Field Marshall Bernard Montgomery was driven in during the Second World War, and the bus that drove the FA Cup-winning Coventry City side in 1987.

One of the city’s most iconic buildings is the Coventry Cathedral. The Church of St Micheal, as it is officially known, was initially constructed during the mid-14th century and was the jewel in Coventry’s preserved medieval centre. During the Blitz, Coventry’s Cathedral, along with much of the city, was destroyed by Luftwaffe bombs and only ruined shell of the church now remains. Left as a memorial to the destruction of the city, this is now hallowed ground to many and makes for a poignant visit.

A newer cathedral was built in the 1950s, only yards from the old ruin. The contrast between the two creates an idyllic and picturesque cityscape, only adding to appeal of the site.

The Herbert Art Gallery and Museum is a microcosm for Coventry’s artistic and cultural endeavours, of which there are many. Opened in 1960, the gallery and museum are named after Sir Alfred Herbert, an industrialist, philanthropist and a Coventry native who donated money to the building of the centre.

When touring the art gallery and museum, you will be greeted by an array of different exhibitions. These exhibitions showcase everything from Old Masters paintings and natural history displays to a collection of 19th-century women’s clothing. The sheer variety of the museum’s and gallery’s collection makes it a great place to visit.

The large communal War Memorial Park is one of the greenest spaces in all of the city and is the perfect escape from the urban sprawl. The park was built as a permanent memorial to the 2,587 men of Coventry killed during the First World War. The 90-foot high monument that stands in the centre of the park has inscribed the names of the fallen on both world wars.

Along with the memorial, the park is home to football pitches, bowling green, a small golf course and tennis courts. Stroll around this idyllic green space on an idle sunny day or come to the park during one the many festivals and events that are held here every year.

As a city home to a wide range of successful musicians, bands and artists, there is no surprise that Coventry is host to a music museum. This museum is a must-visit for any serious music fan and makes for excellent viewing. The independently-run museum makes for a great outing for the family and brings Coventry’s music scene to life.

Throughout the museum, you can observe exhibitions on historical music, electronic music pioneer Delia Derbyshire and, arguably Covenrys biggest musical export, The Specials. A whole exhibition is dedicated to the two-tone band, taking you through the history of the band and its wider cultural and social effects.

Grab the chance to sit in the cockpit of a Gloster Meteor, the first jet plane to be produced by the British. The museum’s highlight is the Frank Whittle Jet Heritage Centre, named after the Coventry native and the man who single-handedly invented the jet engine.

Lady Godiva is as famous as the city that was once her home. A real 11th-century noblewoman, Lady Godiva is said to have ridden through the streets of the town, completely naked, with only her hair to cover her. This was done in protest against her ruling husband’s taxes of the poor.

This iconic story is now seamlessly part of Coventry legend and this seen in the statue that now stands as a tribute to her. The statue was erected in 1949 and sculpted by famous artist Sir William Reid Dick. There are few images more iconically Coventry than Lady Godiva, so a visit here is a must when in the city.

A few miles south of the city lies Lunt Roman Fort. This partially rebuilt fort sits on the site of an original Roman fortification dated from the year 60AD. A reconstruction of the entrance of the fort was carried out by the army with tools of the period, giving it a genuine plausibility and accuracy.

Visitors can now wander around the fort and be instantly transported back nearly 2,000 thousand years. There are often historical reenactments taking place at Lunt Roman Fort, with Roman soldiers in full armour, artefacts and weapons, all bringing the world of Roman Britain to life.

The FarGo Village is Coventry’s creative hub located in the city’s former industrial eastern side. The numerous former warehouses and alleyways now play host to all manner of independent businesses. From coffee shops, vintage clothes shops, to graphic design studios and miro-breweries, there is little you will not find here.

Visiting FarGo Village is a captivating experience for those who enjoy the creative side of life. Those supporting the independent businesses that have sprung out of Coventry’s post-industrial past has given a new lease of life to the city. Be sure to find what events are being held here during your visit to Coventry.

Southeast of the city lies one of the most significant and prominent castles in English history, Kenilworth Castle. Constructed by the Normans during the early 1120s, the castle contended to be at the centre of English history for hundreds of years. In 1266 the castle was subject to a six-month-long siege that is thought to be the longest ever in Medieval England.

The castle welcomed Elizabeth I in 1575 with great pomp and ceremony and was eventually destroyed by parliament forces during the civil war. It was then that the once-grand castle fell into disrepair. Today you can take a tour of the legendary castle and learn all about its vibrant past.

Not far Kenilworth Castle is Stoneleigh Abbey, a stately home built on the grounds of a 12th-century Cistercian abbey. The abbey was passed into the hands of Sir Thomas Leigh in 1558 after Henry VIII dissolution of the monasteries. The grand stately home passed down through the Leigh family and was one of the first of its kind to open its doors to the public.

One frequent visitor to the stately home was famous English author Jane Austen who was friends with the family. Along with the regular tour of the home and abbey, you can also take a unique Jane Austin themed tour, adding to appeal of Stoneleigh Abbey.

Coventry plays host to the largest free musical festival in the UK every year. Godiva Festival attracts hundreds into the local War Memorial Park, where stages are erected, and a fantastic bill of musicians and artists play over three days. The event started in 1997 and has been a huge success in the city for many years.

Godiva is must-see for any music fan when in the city of Coventry. Be sure to keep a lookout for whos on the line up when you’re in town.

If you are looking to escape the hustle and bustle of Coventry’s busy city, then look no further than the Brandon Marsh Nature Reserve. The reserve is just east of the city and offers 220 acres of blissful calm and soothing land, large pools and a habitat full of birds and other wildlife.

Stop for a bite to eat and a refreshing drink in the Brandon Marsh Nature Reserve tea rooms. This is a great place to observe the reserve in all its beauty while eating a cake or two.

Ricoh Arena is Coventry’s premier sporting destination home to rugby, football, netball more. Once home to Coventry City football club, the Richo has been at the heart of the city’s sports for many years. Alongside seeing a variety of sporting events, you can also take a tour of the 32,000 seater stadium, getting a behind the scene look at its inner workings and history.

Although only constructed in 2005, the stadium has seen its fair share of atmospheric music concerts and iconic sporting events – book ahead to be front row at the next one!

Ryton Organic Gardens is an unmissable day out for keen horticulturalists and lovers of all things that grow. Lying just south-east of the city, these gardens are home to an extensive collection of plants and flowers from all over Britain and the globe. When you take a tour of these bespoke gardens and flower collection, and you will be in floral heaven.

Using only organic growing methods, Ryton Organic Gardens aims to promote a healthier and more sustainable way of growing plants and caring for the natural world. A stroll around these colourful gardens is a sure antidote to the hecticness of the city.


15 Best Things to Do in Coventry (England):