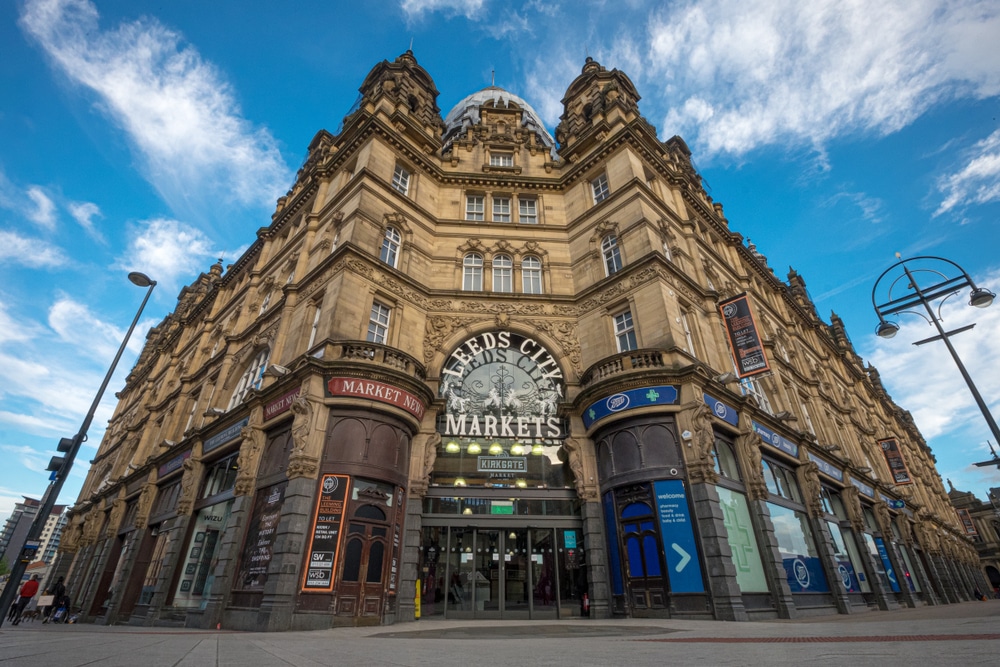 Along with being the largest city in West Yorkshire, the city of Leeds is the fourth-largest urban area in the entity of the UK, a statistic that makes it a force to be reckoned with when it comes to iconic British cities. Flanked on either side by open green spaces and national parks, a visit to Leeds combines the best of town and country when in ‘Gods own country’.

Starting out as a small manorial borough, Leeds grew in an industrial powerhouse during the 18th and 19th centuries and continues to be a huge centre for British manufacturing. This is blending into Leeds’ bustling music, arts and theatre scene to create a Northern English city that should be on everyone’s must-visit list.

Situated in the heart of Leeds city centre, The Corn Exchange is a huge domed Victorian building that now acts as one of the best boutique shopping centre and independent food stall locations in the country. Originally constructed in 1863, the impressiveness of the building’s architecture is matched only by its stunning modern interior.

Head to Leeds’ Corn Exchange to get a little retail therapy done and find the next best look in one of the many boutique stalls. The lower level of the Corn Exchange is dedicated to Leeds’ excellent independent food retailers. From sweet stalls to foods of the world, you are sure to find something that tingles your taste buds here.

Another of Leeds’ must-see shopping destinations, The Arcades are seen as more of an upmarket and elegant retail experience. Although you may be spending a little more at The Arcades’ high-end boutique stores, it is worth it just to observe the art nouveau halls and shop fronts. The beautiful Victorian and Edwardian design of these shop fronts instantly takes you back to a simpler and more decadent time.

Don’t let The Arcades pretentious nature scare you away, as nestled among the lavish decor are all the old favourites from the world of modern city shopping. Young or old, lavish and sensible, it is all here among The Arcades of Leeds.

The Royal Armouries Museum in Leeds is the United Kingdom’s official museum of arms and armoury, and one of the oldest museums in the world. Originally housed within the Tower of London from the 15th century, the Royal Armouries Museum was moved to Leeds in 1996. The museum’s vast collection is a must-see for any history buff and those interested in the world of weapons and armoury.

The Royal Armouries Museum is home to a huge collection of over 8,500 war-related artefacts, including Henry VIII’s tournament armour, 19th-century Chinese decorative shields, Second World War weaponry and everything in between.

Located a few miles north of the city centre is the idyllic and picturesque space known as Roundhay Park. One of the biggest parks in Europe, Roundhay Park, covers an area of 700 acres and includes parkland, lakes, woodland and several decorative gardens.

You can wander around the park for hours and still find new and relaxing things to do. Whether this is boating out on one of the lakes, spotting the many sculptures and features, or simply enjoying the park’s many floral gardens. Various events and shows are also held within the park every year, so be sure to keep an eye out for what’s on when you visit the city of Leeds.

The country manor of Harwood House lies just a short journey north of Leeds city centre and makes for a most enjoyable day trip. The now Grade I listed building was constructed between 1759 and 1771 and was home of Edwin Lascelles, the 1st Baron Harewood. In fact, his descendants still own the building today.

Walking around the stately home, visitors can observe the grandness of each room and see treasures such as paintings by masters of the Italian Renaissance and impressive portraits of the house’s former owners. Venture out into Harewood House’s grounds and see the Harewood Bird Garden & Farm Experience, home to a collection of exotic and rare birds.

Nestled along the river banks of the Aire in the northern area of Leeds is the famous Kirkstall Abbey. The well-preserved ruins of this 12th-century abbey have been a popular tourist spot for generations, and it is easy to see why. Once a part of the Cistercian monastic order, the abbey was sacked during the Tudor reformation and has stood as shell ever since.

The picturesque ruins have been painted by the likes of Turner, Girtin and Cotman, a testament to the beauty of the place. Visit during the early or late hours to capture a fantastic sunset or sunrise.

As one of the biggest sporting clubs in all of Yorkshire, no list of things to do in Leeds would be complete without a nod to Leeds United Football Club. Taking a tour of the football clubs home ground, Elland Road, is a fantastic day out for both fans of Leeds United and general lovers of the game.

Enjoy a stadium tour of Elland Road and see the inner workings of a professional football club. See the famous trophy room, changing rooms and even walk out into the dugouts. Leeds United are one of only a few clubs that allow stadium tours during match days, adding a whole other element to the tour.

The Thackray Medical Museum is a fantastic museum dedicated to telling the story of the world of medical practices. The immersive exhibitions of the museum take visitors down the long road of medicine’s interesting yet dark past. Highlights of the museum include a huge replica of the human digestive system, a display on 19th-century midwives and a vast collection of historic surgeons tools.

Alongside the extravagant exhibitions, the museum is home to 50,000 objects from medical history which date back as early as Roman Britain, right up to the present day. Though it can be a grizzly experience, the Thackray Medical Museum is right up there with some of the best museums in all of Britain.

The Henry Moore Institute’s collections are as varied and diverse as the discipline of sculpture art itself. Located in the very heart of the city, the institution represents the beating heart of Leeds’ artistic community.

Seating over 1,500 people, Leeds’ Grand Theatre is grand in both name and reality. Opened in 1878, it is an impressive mix of Romanesque and Scottish Baronial architectural styles, making it one of the most breathtaking buildings in the city. The inner ceilings are carved by the famous local sculptor, John Wormald Appleyard. The Grand Theatre is still the go-to location for a superb night of theatre.

The Grand Theatre is a popular location for West End shows touring outside of London and all over the country. This being said, you are sure to catch some of the best plays and musicals shown anywhere.

Once winning the award for the most family-friendly day out, you are sure to have a fantastic day out at the Abbey House Museum. The museum is constructed to mimic a Victorian street, and this effect is certainly done well. Actors walk theses streets dressed in period clothes and live the life of Victorian residents.

A number of displays are curated for the children, including a collection of Victorian toys and clothes. Other attractions here include a model of a Victorian drinking house – perfect for the adults have a little respite. You are sure to feel instantly transported back in time a the Abbey House Museum.

As one of the largest indoor markets in all of Europe, it is no wonder that Kirkgate Market attracts thousands of visitors every year. With over 800 stalls selling a huge range of goods, from fresh fruits and vegetables to vintage clothes, there is something for every type of shopper.

A market has stood on this spot for over 200 years, making it a Leeds institution. Although there are many other places to shop in the city, you are guaranteed a bargain if you head to Kirkgate Market. It is advisable to turn up in the early morning if you want to beat the inevitable crowds.

Highlights include a huge map of Leeds painted on the floor of the gallery, a fearsome Bengal tiger specimen frozen in an attacking pose and a collection of Roman artefacts. You are sure to leave the museum with a winder knowledge of both Leeds and the wider world.

Hyde Park Picture House is truly a Leeds institution, and no visit to the city would be complete without checking it out. Opened during the first months of the Great War in 1914, a small advert in the local paper declared it was the cosiest picture house in all of Leeds, a reputation that it still has today.

With much of its original exterior and interior design remaining, watching a film in this Grade II listed building is like no other cinema. Even if the film you watch here is a modern blockbuster, the original box ticket booth and modesty gas lights will take you instantly back to the days of early 20th century England.

Taking the traditional laser-tag to a whole new level, Battlefield Leeds is a great way to spend a day with family and friends. Using state of the art equipment, parties are divided into teams and set a series of military-style takes, all interwoven with a laser tag battlefield situation.

Unlike paintballing, participants will face no pain or injuries, but like playing soldiers, you will give to have the ‘killer instinct’ and shoot down your opposing team before they do the same to you. This is a fantastic activity for both kids and those young at heart.